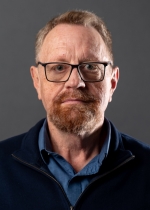 During his 30 years at Snow College, Vance Larsen has served as Director of the Horne School of Music, and Founding Dean of the Division of Fine Arts, Communications, and New Media. During his tenure in these leadership positions, the music program at the college has experienced significant growth in both enrollment and quality. Dr. Larsen also served as Director of Bands at Snow for 25 years. His ensembles have been recognized by multiple performances at College Band Director’s National Association, and other state and regional events. Larsen has served as Executive Director of the Juilliard Jazz Workshop at Snow College, and was co-founder and Executive Producer of the Benny Golson Jazz Festival. He was a driving force in conceiving, and writing the curriculum for Snow’s Bachelor of Music with Emphasis in Commercial degree. He currently co-directs the Snow College Commercial Music Ensemble. Dr. Larsen also has considerable experience in the public schools, where he taught for several years, and was named UMEA “Rookie of the Year.” Recently, Larsen served as Higher Education Vice President for the Utah Music Educators Association. In addition to his academic work, Larsen is a drummer/guitarist/songwriter, with significant professional experience. His songs are available on all digital distribution platforms under the band name Uncle Boaz. Larsen has also had a distinguished career as a field artillery officer in the Army National Guard. He served as a firing battery commander and battalion executive officer. His military career culminated with an assignment as a field artillery battalion commander, where he presided over two successful active duty deployments. He retired as a Lieutenant Colonel after 26 years of service. He is a recipient of the US military’s Legion of Merit award, the John and Suanne Roueche Excellence Award for Innovation in Higher Education, and the Jesse Madsen Brady Teaching Award. Mr. Larsen holds degrees from Snow College, Utah State University, Brigham Young University and a PhD from the University of Utah.