EPHRAIM, Utah—Tyler Hughes stepped down today as Snow College head football coach. Hughes, 33, has been on the Snow coaching staff since 2004 and has been head coach for the past two years. Hughes will continue teaching classes and helping with the football program through the spring semester, but has resigned as head coach effective immediately.

This past season his Badger squad was 11-1 overall including a 47-21 win in the inaugural Carrier Dome Bowl in Syracuse, N.Y., and finished ranked No. 3 nationally. Snow went undefeated, 8-0, in the Western States Football League (WSFL) to 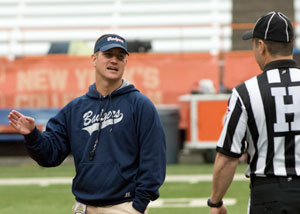 claim the league title outright for the first time since 2008. Snow won the Top of the Mountains Bowl in 2011 following Hughes first season at the helm. This past season he was named WSFL Coach of the Year and leaves while on a nine-game winning streak.

Hughes was named Offensive Coordinator in 2005, holding that position under head coach Steve Coburn until he was named to replace Coburn who left Snow following the 2010 season. Hughes’ winning percentage of 0.833 (20 wins, 4 losses) is second in Snow College history only to Coburn’s 0.883 (53 wins, 7 losses). Hughes prepped at East High School in Salt Lake City and played wide receiver for Snow during 1999 and 2000. He spent one year coaching at the high school level as offensive coordinator and running backs coach at Murray High School in Salt Lake City during 2003.

This year’s Snow squad had a school record six players named to the NJCAA All-America teams, including sophomore Breon Allen whose 1,632 yards made him the first Badger ever to lead the nation in rushing. Twelve Badgers were named to this year’s All-WSFL teams, also a school record. Allen and Ofa Hautau were named WSFL Players of the Year, and combined with Hughes being tapped as WSFL Coach of the Year, this is the first time in school history Snow has swept the league awards. Hughes implemented a community service plan that produced over 400 hours of service by team members. He guided seven NJCAA Academic honorees and 27 Snow College Dean’s List honorees.

Hughes plans are to pursue a Master’s degree in Business Administration full time. He has a Bachelor’s degree in Business Administration from Utah State University. “I am moving towards a new chapter of my life,” Hughes said. “I still love the game and have a passion for it. Being able to work with our coaches and players has been a tremendous blessing and one that I will always look back on with gratitude. That said, it is time to move on. I look forward to fulfilling some educational opportunities that are ahead.”

“Tyler has led Snow College football in a professional, consistent manner. His concern for the program, players, coaches and college were always his top priorities,” said Snow athletic director Rob Nielson. “He worked to improve his players on and off the field. His players succeeded in the classroom and on the playing field. We will miss him and we wish him the best as he moves forward in his life and career.”

Snow College president Scott Wyatt added, "I am going to miss Coach Hughes at Snow College. He was an exceptionally good role model for our student athletes and a delight to work with. I understand his goal to advance his education and wish him the best."

“I want to thank the Snow College administration, especially President Wyatt and Rob Nielson for providing me this opportunity,” Hughes said. “Our staff and players here have been tremendous as well and they have all played a major role in the success of our program. Finally, I want to thank my wonderful wife and our sons. They have supported me every step of the way.” Hughes is married to the former Lisa Adamson and they have four sons, Kenyon (11), Isaac (9), William (5) and Max (3).

Founded in 1888, Snow College serves nearly 5,000 students on its Ephraim and Richfield Campuses. With a full offering of transfer and career and technical programs, Snow College is committed to meeting the needs of Central Utah and beyond.