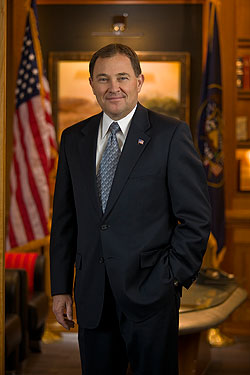 EPHRAIM – Gov. Gary Herbert will be addressing and meeting students during a visit to Snow College Thursday.
Herbert will speak to a convocations crowd at 12:30 p.m. in the Eccles Center for Performing Arts. Prior to his address, he will be holding a meet-and-greet reception in the lobby at 11:30 a.m.

“We are honored to have Gov. Herbert on campus,” said President Scott Wyatt. “It is a treat for students, faculty and staff to hear from him.”

Each year a wide variety of speakers and entertainers address the Snow College convocations body. This year, Gov. Herbert will serve as the concluding speaker.

His speech, as well as the meet and greet, is open to the public.

Gov. Herbert took the oath of office in August 2009, previously serving as the state’s lieutenant governor. Herbert is a lifelong Utahn, and he and his wife Jeanette have six children and 13 grandchildren.