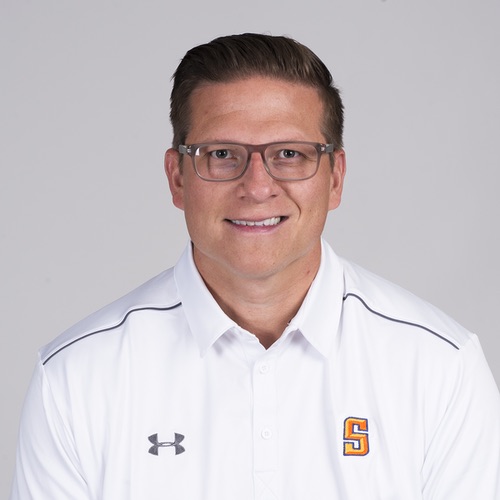 Athletic Director Rob Nielson today announced Andrew Mitchell has been named the new head football coach at Snow College. Mitchell has been the offensive coordinator for the Badgers over the past two seasons, and replaces Paul Peterson who was named the head coach at Dixie State on Sunday, Dec. 2.

"Coach Mitchell has been at the forefront of the team’s success over the past two years, and is uniquely qualified to step in and take over the reins of our nationally-ranked football team," Nielson said.

"We are pleased that Coach Mitchell has accepted the head football coaching position at Snow College and have great confidence in his ability to mentor our student athletes," said Snow College President Gary Carlston. "The essence of football at Snow College is to provide increased opportunity for young men to continue their education, enhance campus life and community involvement. There is still work to do to find membership in a football conference to sustain the program, and we are hoping to make progress in the near future."

Having earned All-America honors as an offensive tackle, and helping the Badgers to an appearance in the NJCAA National Championship game in 2007, Mitchell is a proud Snow College alum. Following his playing career at Snow College, Mitchell played for two seasons at Oklahoma State University where he helped lead the Cowboys to back-to-back bowl games in both 2008 (Holiday Bowl) and 2009 (Cotton Bowl). After his collegiate career, Mitchell enjoyed stints on NFL rosters with the Cincinnati Bengals in 2010 and with both Seattle and Jacksonville in 2012.

He returned to Snow College two years ago after serving as the offensive line coach at Indiana State University during the 2016 season. Prior to joining the ISU staff, Mitchell served as an assistant offensive line coach at TCU. Prior to his stint in Fort Worth, Mitchell was a graduate assistant coach at North Carolina (2014-15), Houston (2013), and Oklahoma State (2012). Mitchell has played or coached in five FBS bowl games, one ACC title game, and two NJCAA National Title games.
As the offensive coordinator at Snow College, Mitchell helped lead the Badgers to a combined record of 18-4 over the past two seasons. During the 2018 campaign, the Snow College offense led the nation in scoring (550), points per game (50.0), yards per carry (6.7) and first downs per game (23.1). The Badgers ranked second in total offense (5,382), yards per game (489.3), rushing yards per game (273.5), rushing touchdowns (37), and total first downs (254). All totaled, the Badger offense ranked among the nation’s top-10 in a total of 16 different statistical categories.

Mitchell takes over as head coach amid news that six members of the Western States Football League will no longer compete in football. Nielson said talks are on-going and the goal is to find a new conference for the Badger football program.