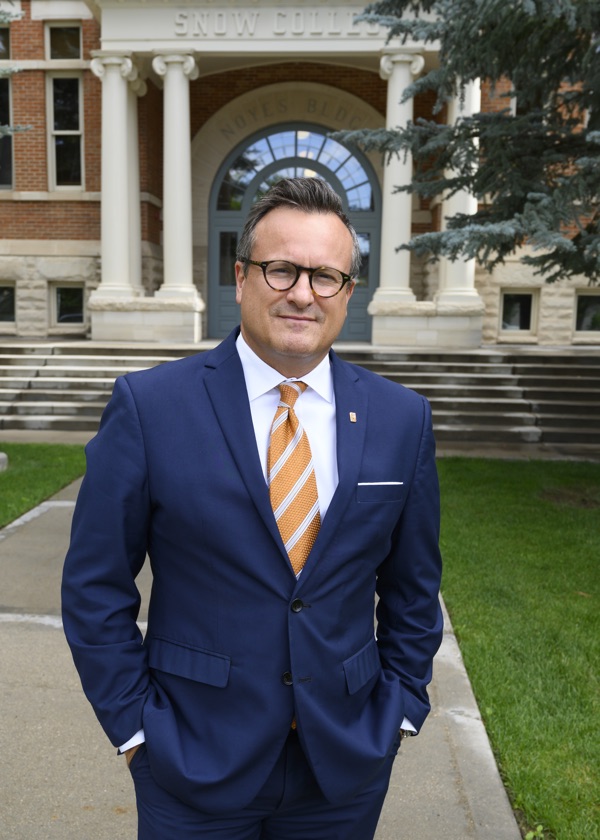 May 12, 2022 – Ephraim, UT – President Bradley Cook announced today that he has accepted a position as president of the American University of Bahrain (AUBH), where he will lead the first American-style co-educational university in the Kingdom of Bahrain.

Cook will step down from his position at Snow College in July 2022. The Utah Board of Higher Education will immediately begin a national search for a new president. Members of the Snow College Presidential Search Committee, which will include representation from employees, students, community and stakeholders, will be selected and appointed by the board.

In a letter announcing the news to the college community, Cook said he is eager to have an opportunity to share Snow’s innovative, collaborative approaches to student success with institutions in the Middle East. “I believe the work of AUBH will be crucial in developing graduates who think critically and find creative solutions to the challenges facing that region. I am eager to help AUBH establish and scale the types of accomplishments we have achieved together here at Snow College, particularly strategies around student growth and success,” Cook stated in the letter.

The then-Utah State Board of Regents selected Cook as the 17th president of the college on January 11, 2019; he officially began his tenure in May 2019 and was inaugurated in November 2019. Prior to becoming president, Cook served as Provost of Southern Utah University, focusing on attracting more international and diverse students. He also helped create 25 new academic programs and centers at the Cedar City campus. Previously, Cook served as president of the Abu Dhabi Women’s College in the United Arab Emirates, and for eight years as a vice president at then-Utah Valley State College.

Cook has also worked as a history professor specializing in Islamic and Middle East Studies. He earned bachelor’s and master’s degrees from Stanford University and a doctorate of philosophy at the University of Oxford. He grew up in Saudi Arabia with professional stints in Egypt, Kuwait and the United Arab Emirates.

As president, Cook encouraged the campus to re-imagine how it could extend its reach to meet the changing needs of various learners in rural Utah. Under his leadership the college saw record enrollment growth, graduation rates and fundraising to support underserved students. Cook’s signature initiatives as president focused on significantly expanding online offerings, creating a technical college division, and allowing greater access, retention and degree completion through various learning platforms. Other top priorities included growing the college’s endowment — which nearly doubled during his tenure — as well as a concentrated focus on diversity, student wellness and safety. Both donor contributions and legislative funding to Snow College increased significantly over the past three years. The college also achieved multiple national and state recognitions including Snow College being designated nationally best-in-class by the Chronicle of Higher Education for student success and receiving ten gold medals at Utah’s Best in State Awards program.

“On behalf of the Board of Trustees and myself personally, I want to express how appreciative we are of President Cook,” said Leslie Keisel, chair of the Snow College Board of Trustees. “He has provided dynamic leadership, led transformative change at the college and put the college on a strong financial footing for the future,” Keisel said. “He has dedicated himself to student success, innovation and expanding programmatic outreach for a broader range of learners. President Cook has been an excellent leader and leaves a talented administrative team committed to fulfilling Snow College’s mission.”

“President Cook went above and beyond in his role to serve Snow College and its community during his tenure with the Utah System of Higher Education,” said Harris H. Simmons, chair of the Utah Board of Higher Education. “The American University of Bahrain is acquiring a most capable leader who led Snow in many great achievements and will be missed among his friends, colleagues and students across Utah. We wish him the very best in his new role.”

Snow College, founded in 1888 by Utah pioneers, is a two-year college with campuses located in Ephraim and Richfield, Utah. The college also has full programs available on-line and offers two bachelor’s degrees. Serving more than 5,000 students, the college has been nationally recognized for its student success rates, affordable cost-for-value, involvement opportunities, and exceptional teaching. Learn more about all Snow College has to offer online at snow.edu.